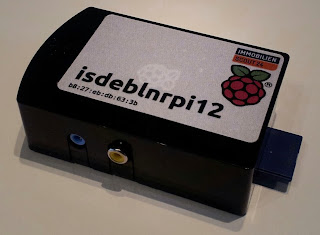 Update (2019): https://github.com/schlomo/rpi-image-creator is the new home of the code.

Recently we got a whole bunch of Raspberry Pi systems at work - the cheapest platform for building Dashboards.

Everybody loves those little cute boxes - but nobody wants to deal with the setup and maintenance. The kiosk-browser package is of course also the base of our Pi-based setup. But how does it get onto the Pi?

The solution is a Bash script: rpi-image-creator available on the ImmobilienScout24 GitHub project. It automates the setup of a Pi with Raspbian by downloading a Raspbian image, customizing it a bit and writing it to a SD card. The reason to write my own script where the following features:


As a result I have now a one-step process that turns a fresh SD card into a ready system.
The script uses some tricks to do its work:
The script can be customized through a rpi-image-creator.config file in the current directory:
HOWTO Linux Raspberry Pi