Friday, June 29, 2012
The Velocity Web Performance and Operations Conference is always about bringing hard data to make a point.

This year I was overwhelmed by the amount of T-Shirts given out by the exhibitors. Over a coffee I was joking with somebody, that there must be like 20000 shirts at the conference. He was loughing it off, but I actually go curious and asked all exhibitors how many shirts they brought:

But, I was wrong. According to the survey there where a total of 10746 shirts for about 2500 attendees, which makes over 5 shirts per attendee!

So what caused this "overprovisioning"? As not everybody likes to take shirts, there must be people who walked away with 10 or 20 shirts...


Now that we have some hard data we should try to learn something from this data. Unfortunately I could not find any other information about all these companies that might be correlated here. Some companies who brought few shirts told me that they give them only to special customers and not hand them out freely.

Dropbox for sure won the "most shirts" price and people have been observed taking Dropbox shirts by the dozen.


Verisign won the "unusually packaged" prize with this vaccum packed shirt (but they brought only a few): 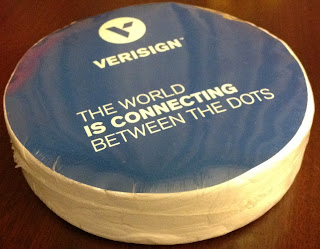 But the main question unfortunately remains unanswerd: What do these companies get out of this? Why did all these companies spend so much money on T-Shirts? Is it a desperate grab for attention? Or is it a way of saying thank you?

BTW, at the devopsdays Mountain View just after the Velocity there where much less shirts, mostly from splunk and of course the traditional devopsdays shirts.

And, if you have time for just one video from the Velocity, make sure to watch Jesse Robbins talk about "Changing Culture & Being a force for Awesome":